Featured above is my contribution to the fantastic illostribute blog run by a very, very lovely chap called Toby Neighbors. Each illostribute post looks at a grand-master of illustration from yesteryear and after running through a short study of their work, a selection of current/
modern illustrators are asked to pay tribute to them by creating a piece of work in the spirit of the featured artist. This recent post looks at Earl Oliver Hurst and you can see the picture I chose to pay homage to below. Click HERE to head over to illostribute to see what all the other brilliant illustrators did (check out my good chum Stuart Kolakovic's contribution, it's bloody brilliant). 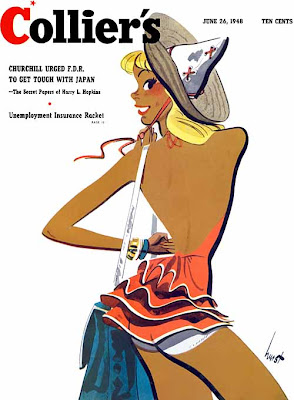 I was very pleased to be asked to take part in helping out the 'Ministry of Stories' based in London, who have set out to create a learning centre where kids from 8-18 can get one-to-one tuition with professional writers and other volunteers. The centre is fronted by the Hoxton Street Monster Supplies which sells everything any monster enthusiast could wish for, click HERE to see pictures from inside this incredible shop.
Anyhoo, the monster bit is where myself and a host of other (much more talented) illustrators come in. We were each asked to draw a monster that the children had come up with and boy oh boy, did they come up with some insane monsters. 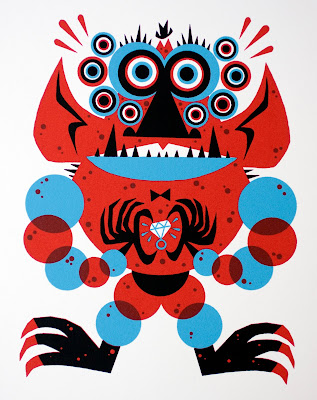 I was asked to draw the monster, Zingolula Cudaduda and all the illustrators were given a limited palette of blue, red and black.
"Zingoula lives in a lion’s cave, stocked with secret gold he stole from the bank. He’s great at scaring people (and with a mouth as big as a white board, ears as big as a 72 inch TV screen, and feet so big they shake the ground, it’s easy to see why) but sometimes this back fires – he’s so good at scaring people he can’t make any friends.
He bathes and goes fishing in the canal all the time, but his arms are still always as greasy as if they were covered in Vaseline, and he has rusty toenails and lips as dry as sandpaper.
After a meal of chicken (and humans) and a play in the forest, Zingoula settles down with his prized possessions – a photo of his mum and dad, some toe nail clippings, and another photo of Zingoula killing some humans. Every night he hopes he doesn’t have bad dreams. He’s terribly scared of giant dinosaurs!
Zingoula Cudacuda was created by the Year 6 class at Burbage Primary School." 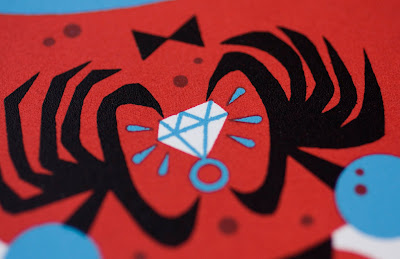 Photos by Alistair Hall.
Posted by Ben Newman at Tuesday, December 07, 2010 No comments:

All That Dreams... Featured in the Guardian Guide.

Tom Frost dropped this on my desk this morning. I was lucky enough to have my illustrations used to help promote Nobrow's incredible 'A Graphic Cosmogony' in the Guardian Guide from the weekend. I am truly flattered.
Posted by Ben Newman at Tuesday, December 07, 2010 No comments: 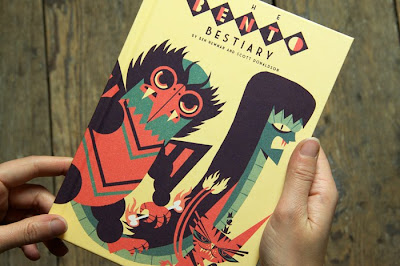 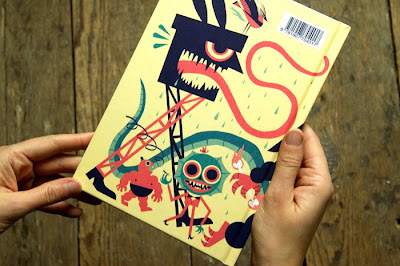 Scrub up and revise your knowledge of a selection of Yokai, the ancient spirits and demons, from Japan. Yes sir, the Bento Bestiary is back and mass produced in hardback format with super fresh reinterpretations for you and all the family to enjoy at the affordable price of £12. Published by the super kind folks at Nobrow and ready just in time for Christmas (provided you order soon dear reader). Scroll your optical receptors down to see some photomographs of this lovely book. 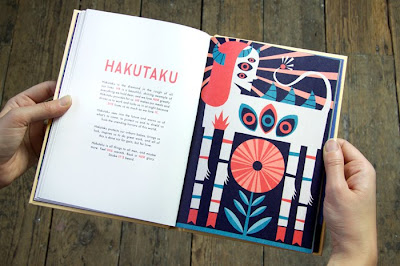 Words provided by the excellent Scott James Donaldson, who has truly made this book something special. If it doesn't make you laugh or feel weird and confused then you have no soul (or you're reading it upside down.) 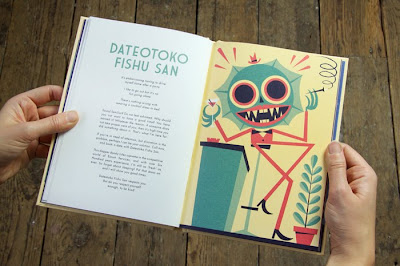 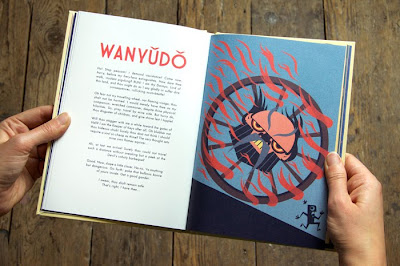 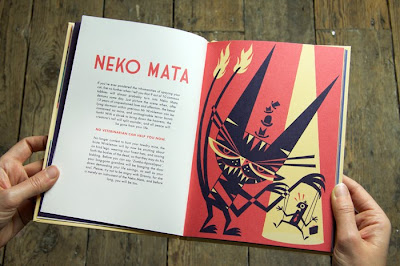 I'd like to say a big thank you to everyone who bought the original limited edition Bento Bestiary, without whom this new edition would never have been made. The Bento Bestiary is available from all GOOD bookshops internationally, you can also pick the Bento up by CLICKING HERE from the Nobrow website. Lastly, here is the front and back cover spread. Thanks for reading. 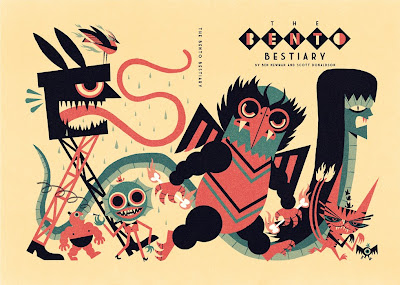 PS - If you are in Bristol on the Weds 8th December then drop by the Here shop and gallery as Scott, myself and Bjorn Lie will be signing copies of our new books (and plowing ourselves with cheap booze) between 7pm and 9pm. You can RSVP on Facebook by clicking HERE or just turn up on the night. Bjorn's new book is called 'The Wolf's Whistle' and I think it might just be the best book I own, it truly is eye wateringly incredible.
Posted by Ben Newman at Thursday, December 02, 2010 1 comment: