Thanks to Ollie from Play Nicely for emailing me the link to this, it made my bloody day.

451 Flier From Start to Finish

Rather than just posting a final image, I thought it would be fun to talk and show you through a recently finished job. The brief was to create the first in a series of fliers for a new poetry evening in Southampton called 451.
After a few emails and a one to one meeting with the client, I put together the first rough (below) that incorporated the ideas we had discussed. The name of the poetry evening comes from 451 fahrenheit which is the temperature that paper starts to burn at, so it was agreed that heat or flame should be used in the image. An image of a poet holding burning paper didn't seem quite right, so we decided that a 'flaming brain' would be symbolically more interesting and could imply a burning intellect or passionate thinking, which better suited the subject matter. 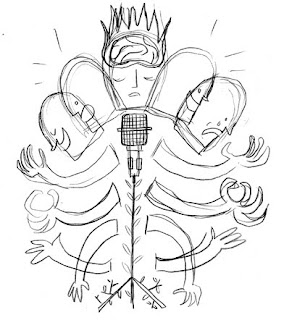 After watching a few poets perform, I realised just how different each individual's movements, vocal delivery and subject matter were. I knew I wanted the main image for the flier to be quite simple but still display a series of emotions and gestures. I felt it would be better to send a colour mock with the first pencil rough to give the client a better idea of how the arms and heads would look when they overlap. Below is the colour rough and as you can see it's very basic but conveys the idea well enough at this stage. 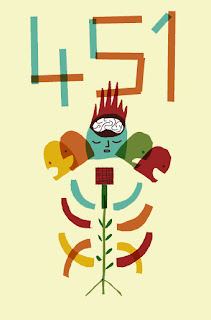 Once the client had agreed to the first pencil rough and the colour mock, I started to draw up a neater pencil drawing adding some changes and fleshing out other elements that I had been asked to experiment with. 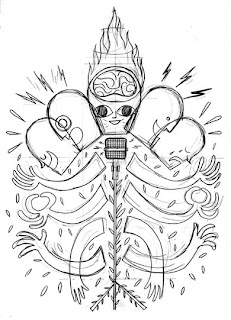 I used the neater pencil rough to create a final colour mock so that we could see what works and what doesn't.

The colour mock above helped us to identify areas that needed to be simplified and altered, for example; the microphone mesh, the brain swiggles and the swirling leaves. I was happy at this stage with the progress of the illustration, so I got to work drawing a logo that would complement the image. I didn't want the logo to be too distracting so I decided to keep it really simple and colourful.

Below is the final image that will be used on the flier. I've added texture and staining to the background colour so that it is no longer completely flat and the main figure has had a weathering effect added to it. Also, you may noticed that the second row of arms have changed their hand shape. It was felt that the meditating hand position may confuse the poetry evening with that of a spiritual event.

There you have it. From pencil scribble to full colour image. Thanks for reading and I hope it was interesting!
Posted by Ben Newman at Sunday, September 27, 2009 9 comments:

Owls for the ARK Project

This Barn owl and Long-eared owl are my contribution to the ARK Project, which is being run by DGPH and printed by IDN. Over 200 illustrators and artists worldwide were commissioned to help fill the Ark and each contributor had to choose an animal native to their country. Illustrators involved include Chris Garbutt, Jon Burgerman, Johnny Yanok and Nishant Choksi. The aim of the ARK project is to help raise money and awareness for endangered animals.

Ali from Pocko very kindly sent out this photo to all the Pocko artists. It's great to see everyone's nesting dolls together at last.
Posted by Ben Newman at Friday, September 25, 2009 2 comments:

POCKOSHKO opens this weekend exhibiting across all 3 Magma stores as part of London Design Week. The show involves 20 international Pocko artists and will showcase a set of Russian dolls by various Pocko illustrators including Paul Bower, Tabas, Kinpro, James Braithwaite and many others. Above is the full set of my dolls that will be exhibited. It's nice to see them together at last.
On another note, I highly recommend checking out Nick White's new book called 'People I've never met & conversations I've never had' published by Nobrow. I picked up my copy at the launch yesterday and it is hilarious and looks amazing too. Shazam!
Posted by Ben Newman at Friday, September 18, 2009 4 comments:

Early Autumn in the City

It's commissioning time through late September and October so there is no better time to give your portfolio a spit and polish. Above is the new poster for the 'Socialism' night held on Bristol's only club on a boat, the Thekla.